I am going on two and a half years at Callaway Golf as a demand planner. My responsibilities include sales forecasting at the product level so we can accurately build and develop the right product to sell in North America. I primarily focus on golf balls, putters and wedges. I use my statistics background daily and couldn’t be happier about where I ended up.

This has been a long time coming. I graduated with a stats degree from Cal Poly in 2016. Time flies. I'm currently living in Los Angeles and just got a new job as the senior analyst of forecasting at the advertising agency OMD. I'll be responsible for modeling the relationship between cost and leads across different advertising campaigns to try to forecast an advertising budget that most optimally allocates its resources. Hope all is well on your end. I miss Cal Poly and my college days more and more.

I am still working for Berkshire Hathaway in San Francisco. Since my last update, I passed my second actuarial exam and moved internally to the Actuarial Department. Now I am working as an actuarial analyst where most of my work consists of analyzing upcoming rate changes and how our pricing recommendations change accordingly. Other projects I've worked on include projecting average cost per claim for each state and calculating average commission for each state. I also compile market share reports that compare how our company does in a particular state compared to our competitors.

There has been a huge learning curve in this role — a ton of insurance terminology that I'm still getting used to, to be quite honest. The exams are a grind, especially the ones that are more focused on finance, like the last one I took. I do still have my 426 and 427 notes, though, because I know those will be helpful a couple of exams from now. Thank you, Dr. Carlton! This position has made me realize that even though I've graduated, there is still plenty to learn.

In the past year, my wife and I have moved up to Sacramento. I’m working at Farm Credit West as a data analyst for their recently developed data governance group.

It’s May 1, 2019, and winter is still here. Even in Game of Thrones winter came and went fairly quickly, but not here in Chicago. It’s still sub 50, and for a California guy, I consider that to be winter. Currently I’m working in Chicago as a health and benefits actuary at Mercer. Minus the weather, I’ve really been enjoying the city so far. Great food and events. When it’s not raining or snowing, I bike to work, which I’ve discovered is the fastest way to commute here. I just took my fourth actuarial exam (Long Term Actuarial Mathematics) yesterday, and I won’t know for another eight weeks if I passed. Hopefully by the next update I’ll have my ASA. Fingers crossed.

Last April I presented a paper at the Population Association of America in Denver on some research I did during the last two semesters of my master's program. It was really great to get some constructive feedback on the first study where I was the lead. Since then I've been at home with my two-year-old daughter, Charlotte, and in March we had our second child, Clesse. We're all tired but very very happy! 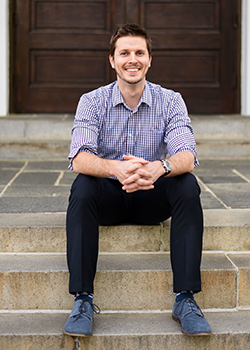 I’ve had a big year personally and professionally. I have been with State Farm for almost four years working in the Athens Modeling and Analytics Graduate Network (MAGNet) at the University of Georgia the entire time. I started as a MAGNet intern, then worked as a MAGNet co-lead and research statistician for almost two years, then officially took over as the program lead last year and was promoted to senior statistician. I love working on The Farm. I appreciate the department I work in, how complex and diverse the projects I lead are, and the challenges of assembling and managing a team to complete those projects. On a personal note, I bought, remodeled (thanks YouTube!) and sold a loft near downtown Athens. It was an exhausting process that I do not plan to do again (they make it look so easy on HGTV). And perhaps the biggest news of all is that I’m getting married in October! I’m always interested in talking about applied statistics/data science, State Farm and/or MAGNet, so feel free to reach out.

I am currently in my second year at AAA as an insurance analyst. My current role focuses on automating recurring analyses through Python and SAS as well as performing ad-hoc analyses for business stakeholders. In my free time I go camping and hiking throughout the Bay Area.

Updates from the land of corn and soybean: I’ve lowered my marathon personal best to 2:52:23; I’ve survived a winter bomb cyclone and experienced -17F freezing weather (-40F with wind-chill. Yes I did throw water in the air, and yes it did freeze before it landed); I’ve finished up my first draft to a paper I’ve been writing for a project that’s dragged on the past year; and I’m interning at Sandia National Laboratories in Albuquerque. I’m excited to finally get started on a new stats project and spend a summer at altitude, where maybe I can finally go sub 2:50 in the marathon (next one is July 28 in San Francisco, then the New York City marathon in November). My latest scheme in sneaking training into my schedule is running to get my groceries — it’s a six-mile round trip! Anything to avoid doing real research so I can stay a grad student forever.

I’m in my fourth year working towards a doctorate in clinical psychology at Palo Alto University with a focus on neuropsychology. Beginning this summer, I'll be starting a practicum at University of California, San Francisco Epilepsy and Pediatric Brain Centers. There I’ll be doing cognitive assessments with children and adolescents who have a range of medical challenges (e.g., stroke, brain tumor, spina bifida). I’ve also been working on my dissertation and feeling especially grateful for the education I received from the Stats Department. Other than that, I’ve been enjoying going on the occasional hike and hope to get back into horseback riding.