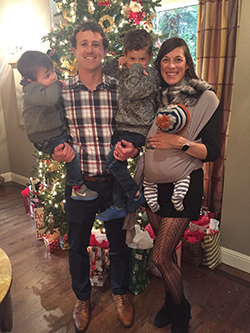 Professional: I was elected as a Principal of Milliman in March 2019. I manage the Health & Group Benefits practice in the west region and still travel frequently to cities on the West Coast for client meetings.

Personal: My family had a very busy 2018. We moved two times, both while expecting our third child. Our third boy, Rhylan, was born in August 2018. In 2019 thus far, we have traveled to Seattle to visit family; my wife and I attended the Grammy Awards; and I took my oldest son Nolan skiing for the first time. 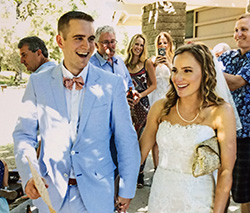 I am currently living in Sacramento, California, with my husband, John. We got married in June 2016, so we’ll be celebrating our three-year anniversary here soon. In December 2017 we had a beautiful baby girl named Olivia Grace. She is healthy and happy and the best thing that’s ever happened to us. 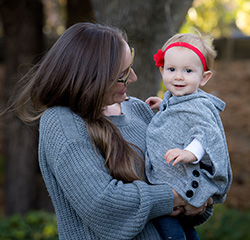 I recently joined SAP Concur as a data scientist, and I am loving it so far. I am helping their U.S. Small Business team better understand their marketing process. I haven’t taken on many big projects yet, still mainly training, but my technical assessment during the interview process was analyzing a dataset of actual flight searches performed across Hipmunk’s app. Some of the flight searches led to the user booking their travel; most did not. Using this dataset I had to use Python and apply machine learning to predict the probability that a future flight search leads to a booking.

So far I’m using Python and Tableau/SQL mainly. Ever since I went back to work after having Olivia, I’ve worked part-time three days a week so that I can be a stay-at-home mom with her two days a week. I also work from home, so it is really a perfect scenario for balancing work and life with a little one. I love being able to take my lunches with her.

Lots of updates but not enough time to articulate it properly, so here is a list: I retired from DJ'ing (a 15-year run). I went to Madagascar to look for frogs. I spent a lot of time in Hawaii looking for frogs and fish. We decided to move to Hawaii and bought a house there. My kids are four and five and super into nature. I am leaving my high school math teaching job (a 10-year run) due to our move. I might get a diving job. My wife plans to continue teaching in Hawaii.

Hope all is well! I am still working for Dignity Health in San Francisco as a workforce analyst, where I do workforce projections and statistical modeling. It’s been fun but challenging to move us towards being a more data-driven organization. On a personal note, my wife and I are expecting twin boys later this summer and couldn't be more excited!

Due to solid economic growth in the past 10 years, Cambodia is now designated as lower middle income by the International Monetary Fund. This change has resulted in less international aid funding and fewer intervention projects. I have shifted my focus from consulting to teaching. I teach Elementary Statistics by Bluman; College Algebra by Barnett, Ziegler, et. al.; and Environmental Science by Enger and Smith.

My career path always seems to be winding. This year I started teaching math at an all-girls high school in Sacramento, and it has been a very positive experience. I teach geometry and statistics, and next year I am the statistics go-to, teaching regular stats and AP. I still teach at Sacramento State University, which is a nice contrast because I don’t have to care as much about them playing on their phones. Ha!

Last summer, I bought a cute bungalow in a nice neighborhood. I have yet to tackle my project list, but hopefully this summer I’ll get around to making some nice updates. Since working at the high school, I’ve unpublished the content on my blog Bee since it’s for mature audiences, and I don’t want to explain that my humor is not the reason why someone’s kid can’t use the Pythagorean theorem. This has allowed me to write and then read my essays at comedy open mics. My ambitions haven’t shifted to becoming a comic, but I really do love hearing their laughter and reactions to my stories. I’m currently compiling these essays in a book, and next year I’d like to tell you it’s complete and hilarious.

After graduating, I moved back home to the Bay Area and now live in Livermore. I have been working at Blackhawk Network for the last 12 years, managing our distribution department. Our company ships the gift cards that you see in most grocery stores across the U.S. and other retail chains like Home Depot, Lowe’s, Michaels, etc. We are the “network” between the card partner — Nordstrom, Macy’s, Visa — and the stores who sell the cards — Safeway, Albertsons, Kroger, Vons, etc. I am married to my high school sweetheart, Peter, have a daughter Wrigley, six, and son Wyatt, two, and have a house full of salt water fish tanks, a chameleon, a snake and a French bulldog named Fred. I still crave Firestone and Woodstocks, so we make a trip to SLO every couple years.

Hi everyone! I currently teach both psychology and statistics courses as an online and face-to-face instructor. My husband and I also own and operate an auction business in Arizona. I definitely keep myself busy with work and our three Weimaraner children, one age six and the other two age three. I wish everyone a great year!